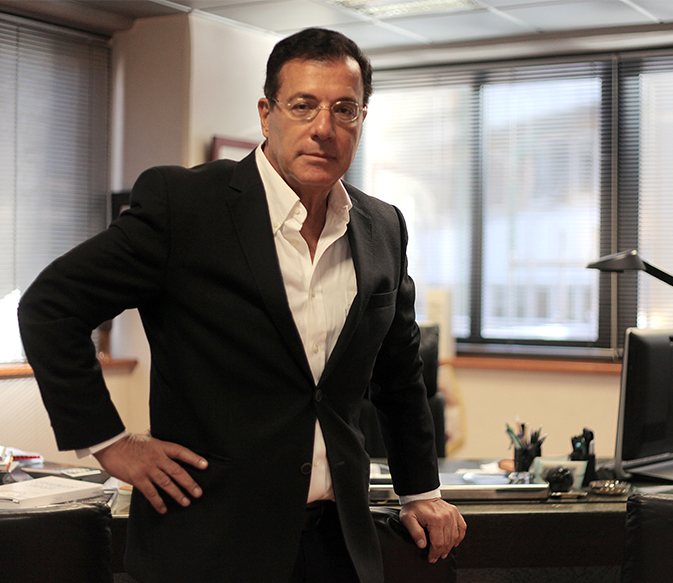 Adnan Houdrouge was born in Dakar (Senegal) of Lebanese-Senegalese descent. Last-but-one in a family of 13 children, he stayed at home until he finished secondary school, then set off for Switzerland where he took a course in architecture. Two years later, he was obliged to put a premature end to his studies for lack of financial resources. In 1969, back to square one in Dakar for this dedicated fan of sport, who joined the family store: Week End Sport.

This shop of 100 m2, which enabled him to explore all the various aspects of the business: purchasing, sales, customer service, merchandising, contact with the brands…. In short, commerce. Adnan Houdrouge discovered a taste for it, already glimpsing opportunities for pursuing a career.

In 1972, the world's greatest sports event was to change his life forever: the Olympic Games in Munich. He gave himself the assignment of fitting out the entire Senegal team in Adidas kits for the opening ceremony. He won the challenge, drawing the attention of Dassler (Adidas) and Daniel Goetz (Export Director), based in Alsace.

Adnan Houdrouge had no intention of leaving things there; he intended to win the support of a large number of brands.Though he firmly believed in the African development, the continent of his childhood did not give him enough visibility in the eyes of the suppliers. Which led him to open the second sales outlet in 1980, in Nice (France), a town he had always appreciated.

In 1986, with his savings in his pocket, he started to look for a store to continue doing what he knew best. He learnt of a business which was up for sale in Ivory Coast, consisting of 9 stores. As he didn't have the necessary financing, he resorted to a bank loan.

This was the birth of Mercure International, in 1986, in Monaco. The same year, the chain of City Sport shops came into existence. Named after the god of commerce in Greek mythology, Mercure International took a new turn on January 11th, 1994, with the devaluation of the CFA franc (franc of the French colonies in Africa). While investors and capitals were fleeing from Africa, Adnan Houdrouge was swimming against the current. He acquired the chain of SCORE food supermarkets from the company SCOA, a total of 8 supermarkets as well as shopping centres in 6 different countries.

From 1994 to 2004, close on 80 City Sport stores opened their doors in France, Italy, Senegal, Congo, Gabon, Cameroon, Ivory Coast, the island of Mauritius and the "Dom Tom" (French Overseas Departments and Territories).

In 2005, Adnan Houdrouge turned his attention to the Rallye group (Go Sport, Casino Géant, Courir). He obtained the master franchise for the Sport stores in his favourite territories and the first Go Sport was inaugurated in Guadeloupe that very same year.

In 2007, the partnership was extended to food, and all the supermarkets took the Casino Géant name. This was the start of modern food distribution in Africa.

Since 2008, Mercure International has been working with the fashion sector, enlarging its portfolio of brand franchises to include Guess, Celio, Aldo, Hugo Boss, Soleil Sucré, L’Occitane, Diesel, Levi’s and Adidas Original. Almost 50 sales outlets were opened in just two years.

In 2009, a new territory was developed: Morocco.

In 2010, the expansion continued with Martinique.

In 2011, City Sport developed in the form of franchises in Algeria and Libya. The deployment of ALDO in France was handled by Mercure International. In 2012, the first stores in Angola made their appearance. Mercure International now operates on 3 continents and in 16 countries, through almost 150 sports shops, 50 fashion stores and about 40 supermarkets, posting a consolidated turnover of 650 million euros.

"You can’t just dream about Africa, you have to build it." A.H.